USA: get your kicks on Route 66

A pilgrimage is what a drive along Route 66 is today. The fabled road lives in songs and literature and just won’t fade away. This is America’s Main Street.

In the earliest days of television in Australia, the black and white screen flickered with many (mostly) American series to entertain the young minds of the babyboomers: Mickey Mouse Club (remember Annette Funnicello?); Cheyenne, Sugarfoot and Rawhide (cowboy cool dudes) and family entertainment – The Nelsons (oh Ricky!);The Donna Reed Show and Father Knows Best. But for us growing, restless teenagers of the time this was ‘too square’, no grunt at all. Bandstand was a constant and we got our rock’n’roll edge with Six O’Clock Rock but drama to get our motor running? No.

Then in the early 60s along came Route 66, edgy, and supremely cool; two guys in a sleek convertible Corvette heading from Chicago to LA . . . with incidents and episodes along the way.  Tod and Buzz slicked back their hair, got moody, threw on their duffle coats and jumped in the car – to drive.

We may not have heard the early song by Nat King Cole – well, it was a recorded in 1946 but Get Your Kicks on Route 66 is embedded in everyone’s musical memory. And our generation may not have that restless seed of youth blossoming as it did in the 60s but the Mother Road waits for the adventurous! 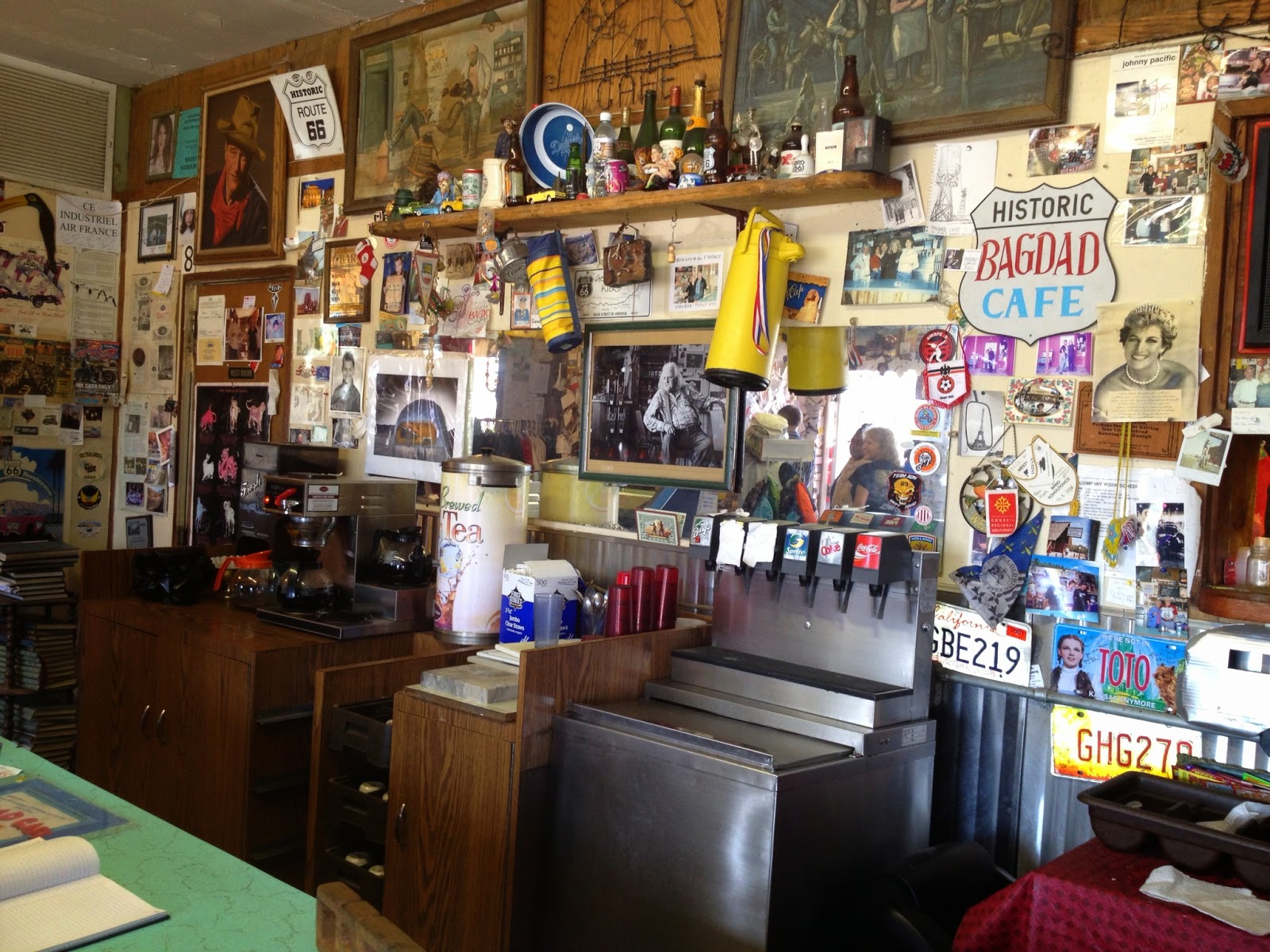 The romanticised highway represents a transition from dirt road to super-highway. Route 66 was the shining beacon as to the importance of the automobile as a new world achievement – and to the American people it symbolised the new freedom and mobility for every person who owned and drove their car. Route 66 was born in 1926, pieced together from a network of existing trails and anonymous roads. It’s the Mother Road that carried life along the highway from Chicago to Los Angeles. The Interstate Highways System took it over in the 1950s and much of old Route 66 was decertified and became a secondary road, a highway of broken dreams and a mythical place that stranded small towns and businesses with cruel bypasses.

Today it’s the road to a new adventure – a link to the past with an air of freedom. In the past decade the idea of Route 66 has been reinvigorated and has made a rock’n’roll kind of comeback – warts and all.

Driving to find the glory days you don’t have to go far out from Los Angeles and for a couple of hundred miles discover what’s happening along the way.

Route 66 and beyond can work nicely if you: 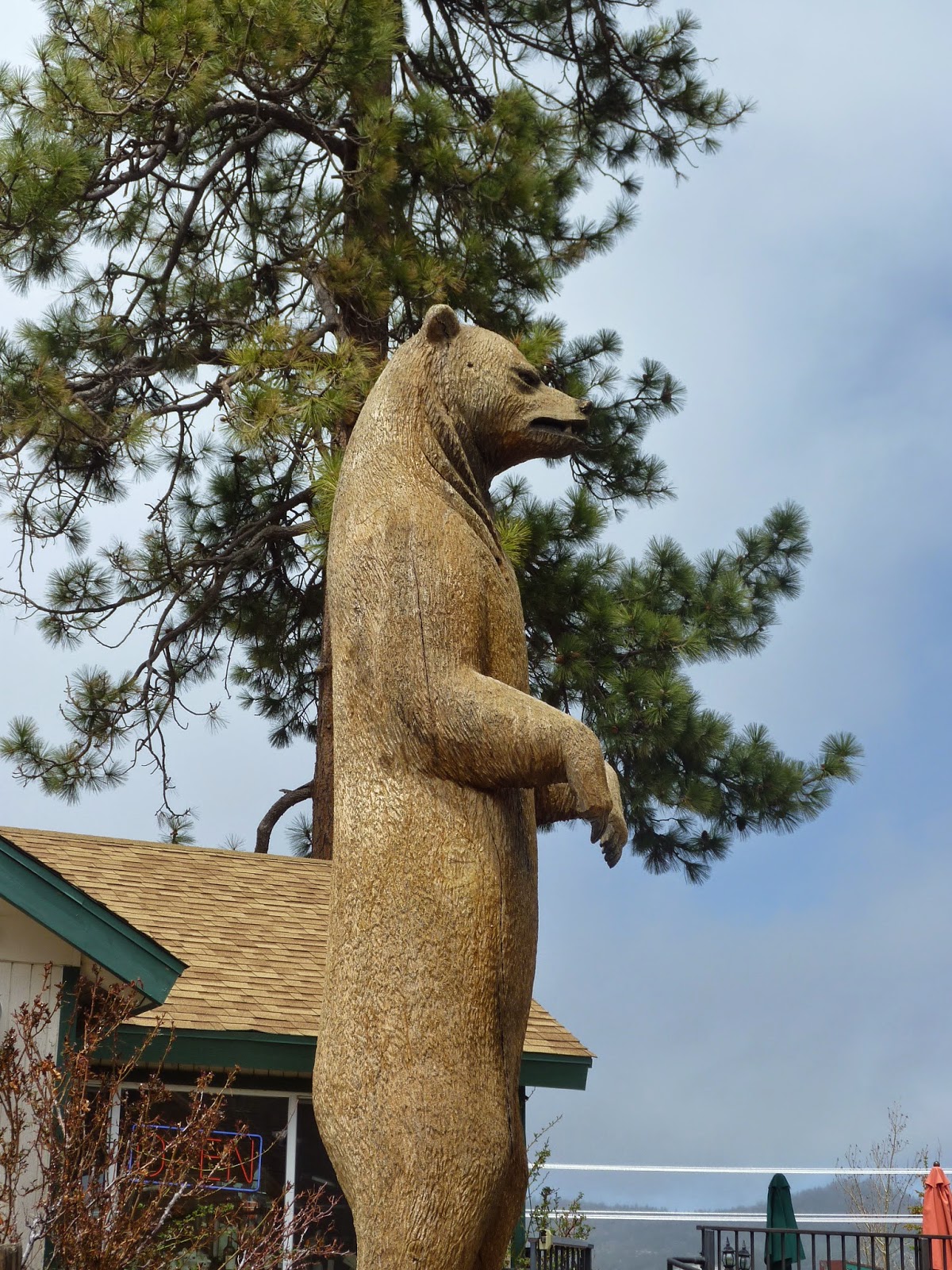 Head out of LA and visit Big Bear Lake, Yucca Valley. Set in the heart of the San Bernadino Mountains, Big Bear Lake and surrounds is startlingly beautiful country with much to do for fun: off-road adventure in a Pinzgauer 4WD – hot to trot and loads of fun; Big Bear Village has a rustic charm with a sophisticated edge – the coffee in town is damn good too!

Yucca Valley is reached after a drive that descends through a layered spread of heavily grassed land to almost paint-by-numbers clarity in the tapestry effect of the landscape. And in the distance a tiny sliver of snow is glimpsed on the top of the San Bernadino Mountains.

There’s a hometown atmosphere and this ‘High Desert’ region is welcoming and eye opening for its nature and cultural heritage. And if you want to meet the locals – they are the friendliest people around, just drop by Pappy & Harriet’s Pioneering Palace for mesquite barbecue chow and you’ll enter an establishment  plonked on the side of the road that looks deserted except for a few utes parked out front. Walk through the doors and it’s packed, there are waitresses zooming around the tables and the beer is flowing and the music is about to start – hip and happening! Step out the backdoor and you are in the old west. 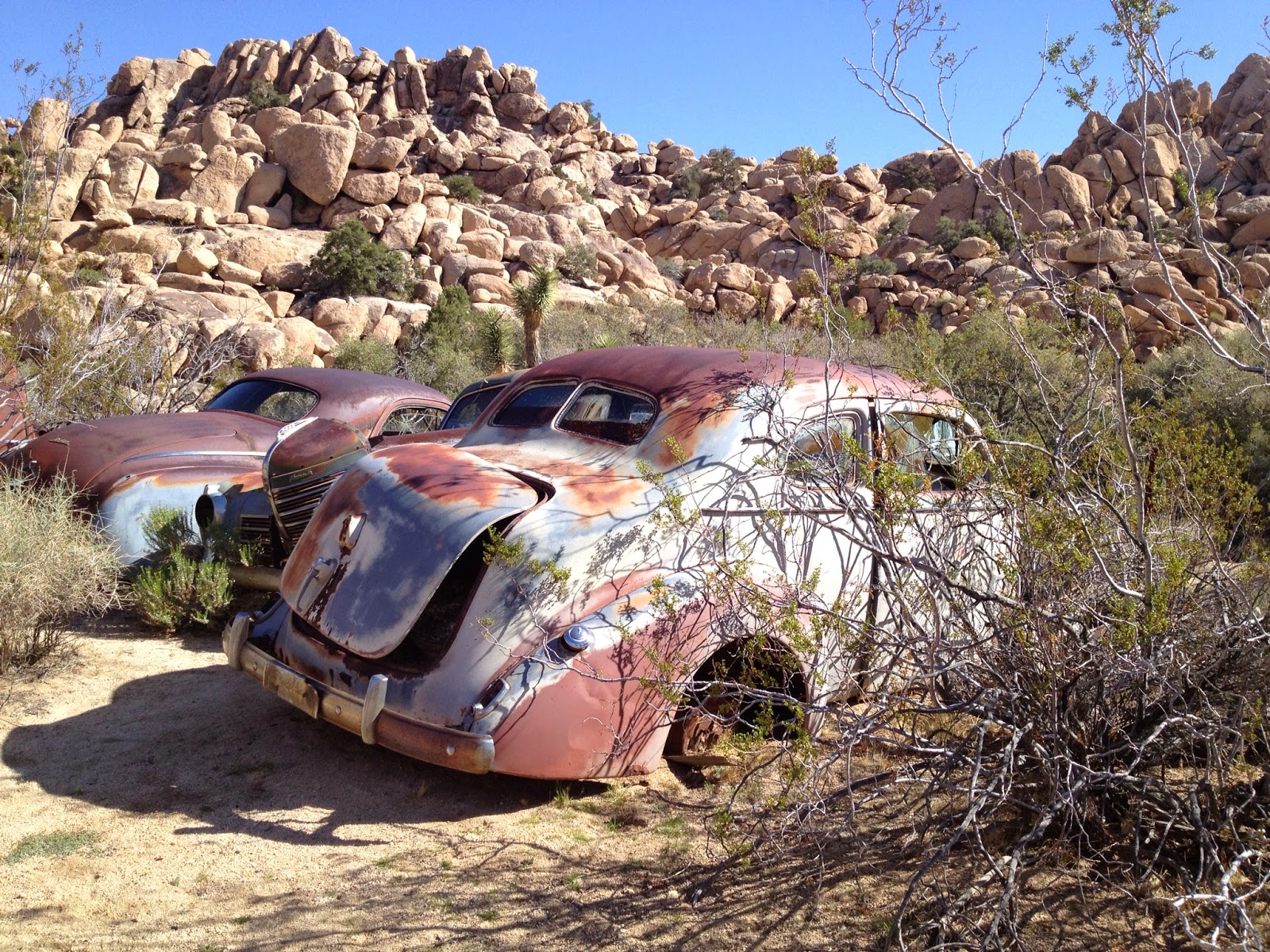 Pioneertown was founded by a group of Hollywood investors in 1946 with dreams of creating a living movie set. The 1870s ‘frontier town’ with authentic facades never did take off but folk had fun there and several of the properties are working sets with art and craft people doing their thing.

Hit the highway and drive through the empty, lonely landscape until you come to the sublime (if you love a desert park) Joshua Tree National Park.

In the park is the Desert Queen Ranch, a crumbling reminder of the toughness of this country and the remains here tell the life story of Bill Keys’ family – the  trials, triumphs and tribulations. Keys lived there from 1910 until his death in 1969. 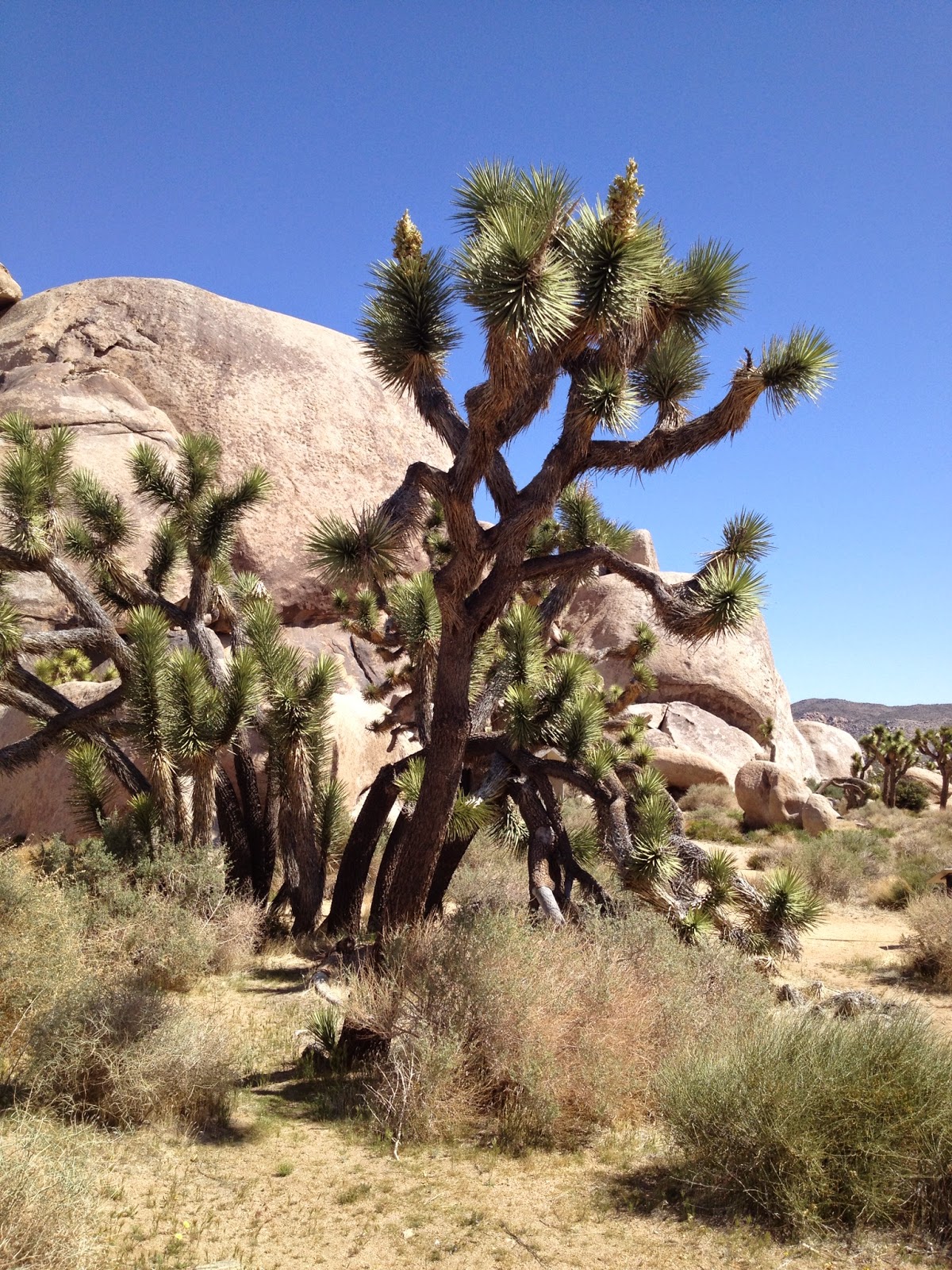 Bill Keys was a resourceful man who was the Desert Donald Trump of his day – pursuing mining and ranching and taking every opportunity to make a killing – which he actually did. He lived on the isolated ranch with his wife and seven children, three of whom are buried there.

During a property dispute Keys shot and killed a man and was convicted of murder and spent a few years in the big house educating himself. (He was paroled in 1950 and was pardoned in 1956 through the efforts of Earle Stanley Garner, author of the Perry Mason novels.)

The original homestead is still there plus outbuildings, a schoolhouse, farm and mining equipment and old truck chassis. The elements are rusting and corroding the debris from Bill Keys’ empire – to restore it or let it crumble back to the earth – that’s still being debated.

Even though it’s a remote and strange desert park, Joshua Tree has drawn some pretty interesting characters – including lots of alien/spaceship sightings. Oddly, the Andreas Fault Line is visible in parts of the park and juts out of the earth like a dragon’s spine. Cattle rustlers are legendary and Keith Richards and Graham Harrison sat out here and took copious amounts of drugs while waiting to have a close encounter with a UFO . . .

In keeping with the mystical/hippy/left-over60s vibe of the area much of the interesting stuff of the area has survived and thrived.

The ‘Integratron’ is an acoustically perfect tabernacle dome and energy machine sited on a powerful geometric vortex in the magical Mojave Desert. (This was created by George Van Tassle, and is based on the design of Moses’ Tabernacle drawings and the writings of Nikola Tesla and telepathic directions of extraterrestrials – that’s the speil anyway.) Whatever floats your boat out here but climbing up to the platform to lie down while someone rims ceramic bowls is quite something – a resonating sound bath indeed.

The historic route continues to evolve as states repair and redirect the road. Entering Amboy, there’s the classic Route 66 stamped on the road in front of a Roy’s Motel sign – classic 60s and a poor old motel that is crying in the shadows for someone to bring back its retro coolness. Faded and atmospheric, the location is not as neglected at is seems. It’s used for commercials and movies – the no-longer-a- town Amboy, Roy’s Motel and Cafe has a certain staying power. A buyer paid cash (lots) for the site in 2005 and has promised to preserve the town and reopen Roy’s.

(The writer cruised into Amboy and was excited to see about a dozen gleaming, shiny black and silver clad Harley Davidson’s – this is where it’s happening she thinks. Just the backdrop for the ‘Wild Ones’; as she drew closer to the bikies – she noticed as they were decked out in denim and leather, chains, bandanas and snake-hipped girls by their sides – they were all drinking Coca-Cola. This was a meeting for the Christian Motorcyclists Association, riding Route 66 to Chicago – it was big, but these boys weren’t going to be bad!)

Away from the bustling metropolis of ‘town’ we started to see the beauty and drama of the Mojave National Preserve – sand dunes lead to volcanic cones, craters became mirage-like salt pans and sand was accumulated in vast amounts everywhere the eye could see – where does it come from?

We cruise past the Whiting Brothers Gas Station, a relic that has been preserved and then stop for a milkshake (it had to be a milkshake) at the Bagdad Cafe (remember the film?). It is still basking in the glory of movie fame – albeit needing a bit of nip and tuck. The love this cafe draws is evidenced by notes stuck on the windows – the clientele is universal; all stopping by to take a peek at the defunct motel from the film and to order a chocolate malt!

We stop for some big town buzz and Barstow fits the bill. Amazing outlet malls here and for some real local hospitality we eat at Idle Spurs Steakhouse – a favourite in the High Desert region of Southern California. Built around the original house – these folk have been slinging steaks since 1950.

After a lazy sleep-in we keep moving west as we’ve backtracked. We stop at the extremely charming and colourful Victorville Route 66 Museum – and we’re greeted by the local lady volunteers – they are the ants pants! There is so much going on in the museum, take an hour or so to let it seep in – from The Grapes of Wrathto the Mother Road’s heyday as one of the greatest ways to experience America on driving holidays.

We wrap up our short Route 66 driving trip with a stop at the original Wigwam Motel. This motel is one of just a couple remaining of a great chain. The wigwams are neat as pins and there’s the place beside them to park your car. This is one of two only (the other is in Holbrook, Arizona)  Wigwam Motels still in business to offer hospitality to drivers on Route 66.

Now stationary, I ponder America’s amazing history – this small part of the vast continent. Roads criss-crossing the country, frenzied drivers taking the freeways, highways and byways, toll roads, side lanes and flyovers – is the romance still there for them, behind the wheel does it still feel that it’s the way to claim the ground under their feet or is it like Route 66, a fabled Main Street where driving trip from A to B is the ribbon that unites more than an idea? www.eaglerider.com (to hire Motorcycles ); www.wigwammotel.com