Where the art is – try a country town

Hopefully Victoria will rally and the restrictions put on its inhabitants because of this mongel COVID-19 will lift and people will be abe to travel intrastate and interstate again. And where better to go than the rural towns. Following, check out Benalla . .

What was guerilla art is now great art. Walls become artworks and sleepy lanes and behind the scene walls and silos the grand canvasses of rural towns. Once was graffiti, is now urban engagement and licence to paint the town red.

It probably began 45,000 years ago in Australia; community minded fellas worked their magic art on to the walls of caves to let passing nomads see what food was available, attractions in the region and objects to be found or maybe just to show off their talent. Rock art galleries started it all. 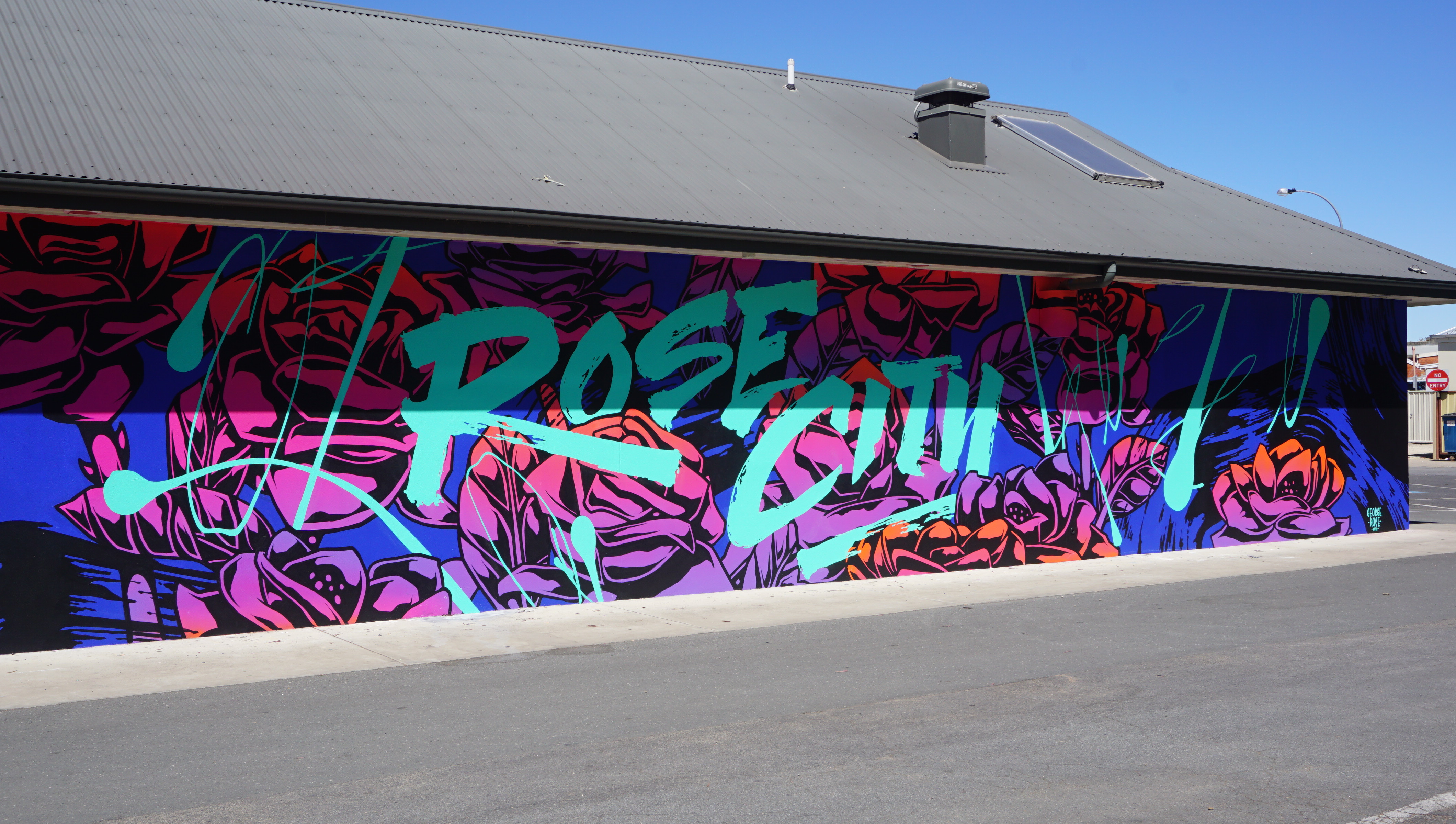 For thousands of years, human beings have made their mark upon plain surfaces, from stick men to tag-style graffiti.

And when someone criticized the wall vandals of the 80s with the sentence “Punks can’t spell Cappuccino”, that phrase became official graffiti and the wall expression medium had arrived, evolved and gained acceptance by the less-than-art-critical-public. 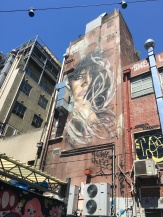 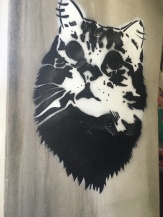 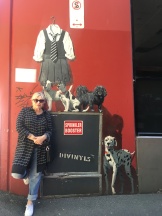 Pre ‘acceptable’ wall art in New York City, of the 70s gave birth to excessive public graffiti – think subway trains. In one of his essays back in the day, Norman Mailer said New York subway graffiti is “the great art of the 70s”. And it burned brightly until Mayor Ed Koch. elected on a clean-up-the-city every which way platform, scrubbed clean the city. By the mid-80s NYC graffiti had faded quietly and what was left or came later became the acceptable norm.

Across the Atlantic, enigmatic artist Banksy launched his wall art career in his home town, Bristol. Stencils became his medium as his art gained notoriety on a big scale in the late 1990s.

Banksy’s work sneaks up on you. Characteristic of the works are the obvious digs at hypocrisy, violence, greed and authoritarianism but pathos and whimsy are in the creative makeup too. 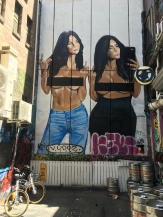 And at home, wall art has changed the urban ‘artscape’ and rural regions. Australia is engaged with a stunning variety of wall/outdoor art that crept in stealthily during the late 90s too. Melbourne had the wall art advantage first up because of the surviving laneways in the inner city. And some of the most creative artists have emerged from the southern capital. 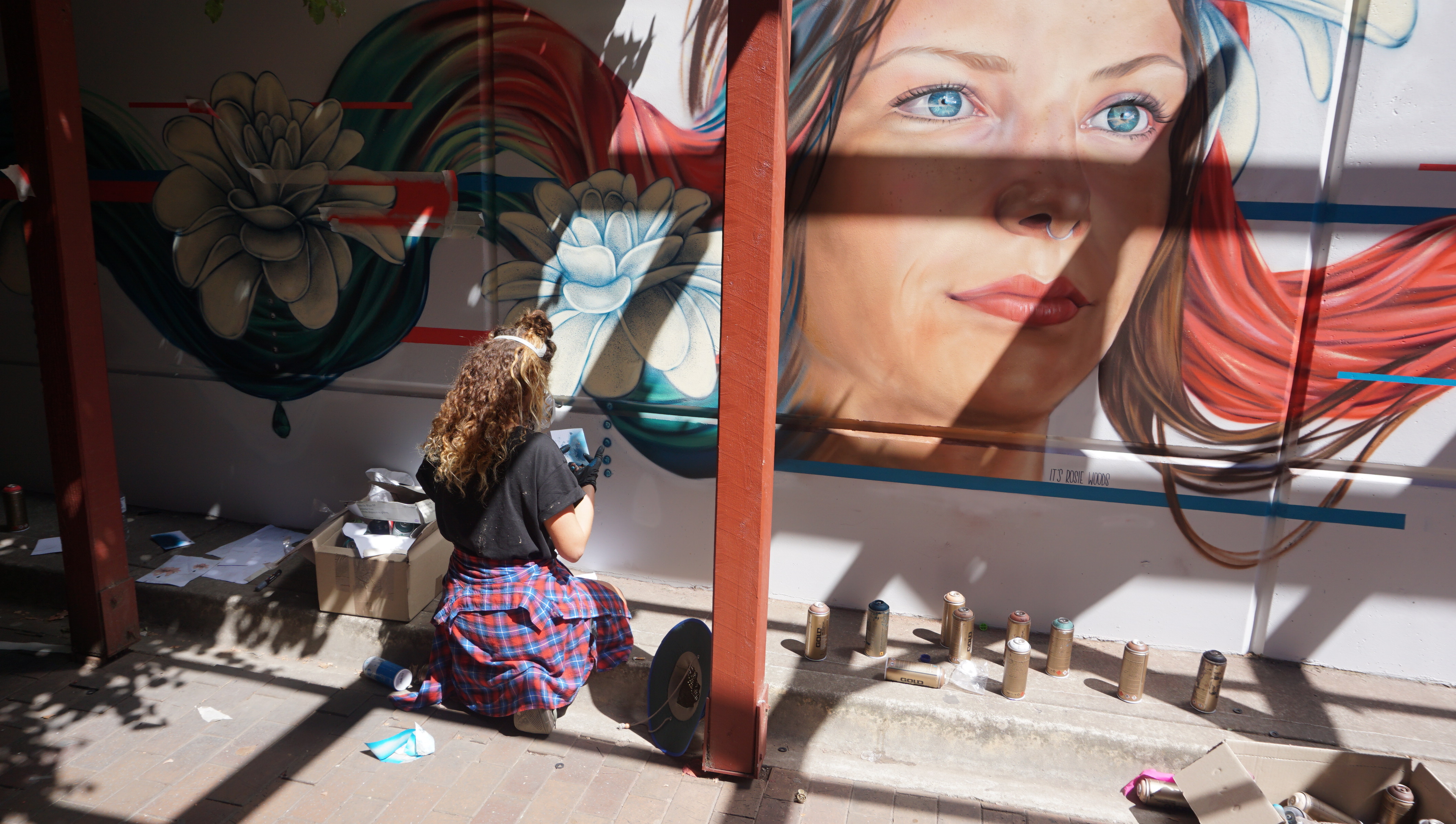 Sydney was a slow starter but every week another piece of excellent art appears on the walls in and around the inner west and on the edge of the CBD. Without a lot of laneways remaining due to concentrated development, the older suburbs snatched the prize.

The big winners for wall art are the small cities and rural towns of Australia with their untouched walls.

In previous blogs I have attended the amazing First Coat Festival in the Queensland tidy town of Toowoomba. I’ve followed wall art festivals to Wollongong south of Sydney, wandered the lanes of Melbourne and followed the fabulous Silo Art Trail in Victoria.

And once you get an interest in wall art/outdoor art there’s no turning back – you see it everywhere and become fans of certain artists. And when you see them at work and converse with them, you’ll find a group of young people who are modest, amiable and happy to share the love of this medium. 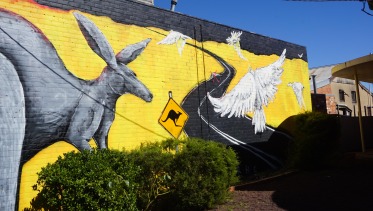 My last excursion into the rural artistic enclaves of Australia was to Benalla in Victoria for the /Wall to Wall’ Festival in March 2018, the second one held there. 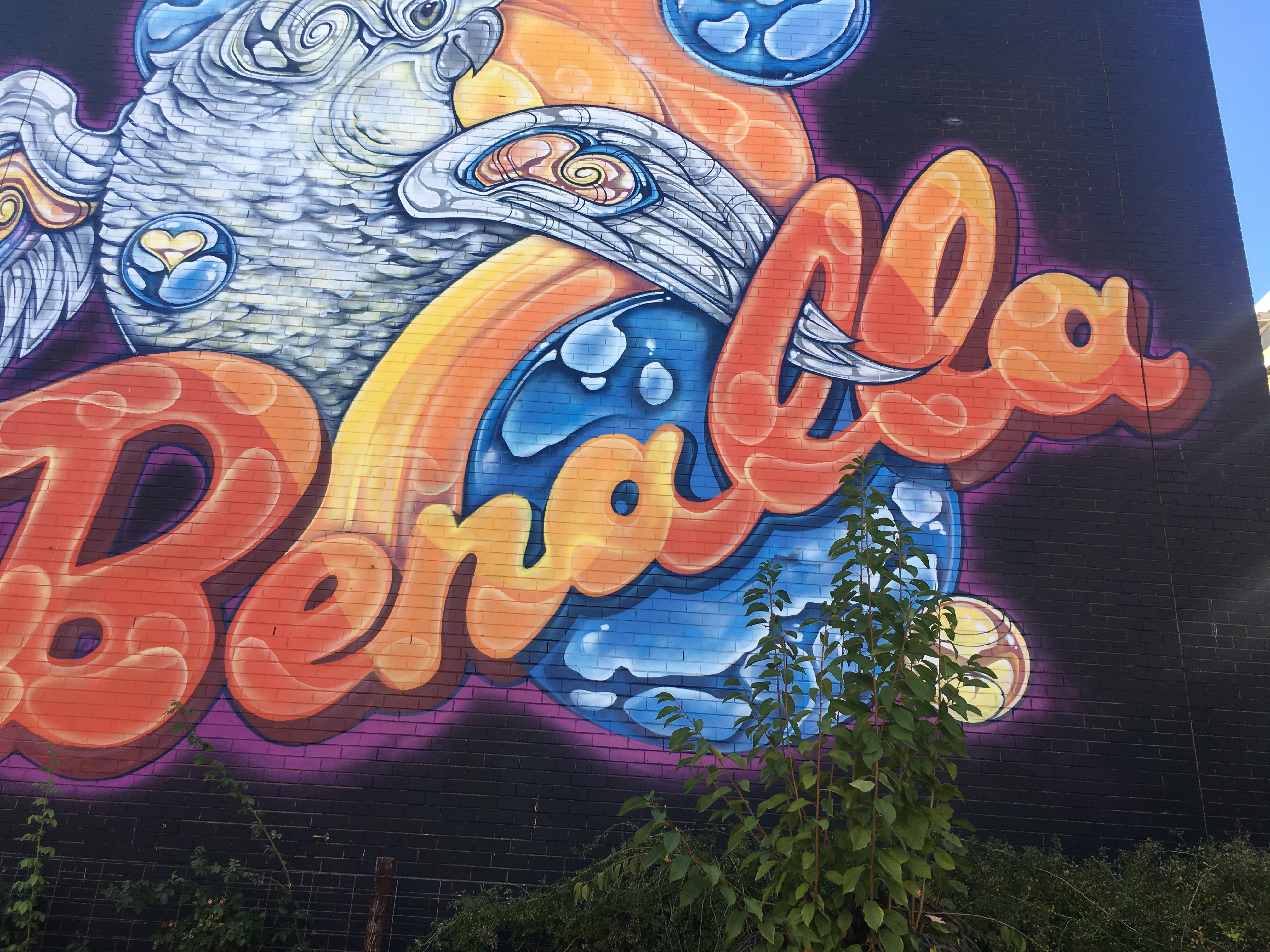 Benalla is a small city located on the Broken River in the High Country north-eastern region of Victoria, Australia, about 212km north-east of the state capital Melbourne. At the 2016 census the population was 9,298. 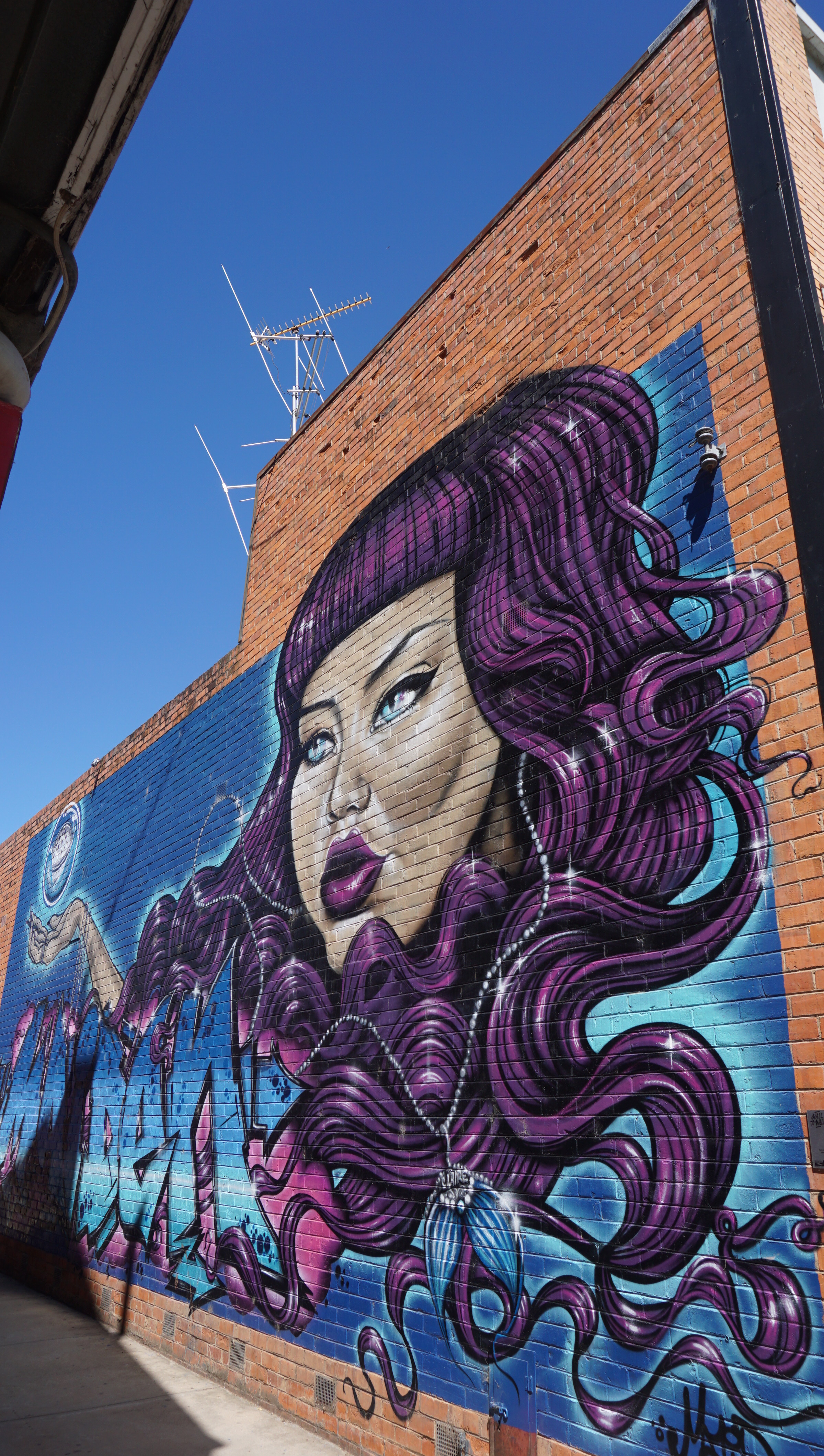 We drove from Sydney and overnighted at the pretty town of Rutherglen just over the border after driving through Albury.

Benalla is a town of character with great coffee shops a bakery that boasts numerous wards for having the best Vanilla Slice in Australia, good restaurants, beautiful Botanic Gardens and a splendid regional art galley. 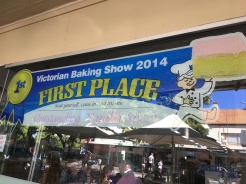 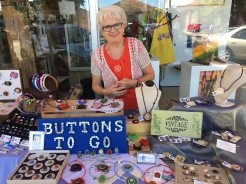 We hit the street running to take in as many artworks as possible. Best view was watching the artists at work. They seem so small against the large canvasses they work on. 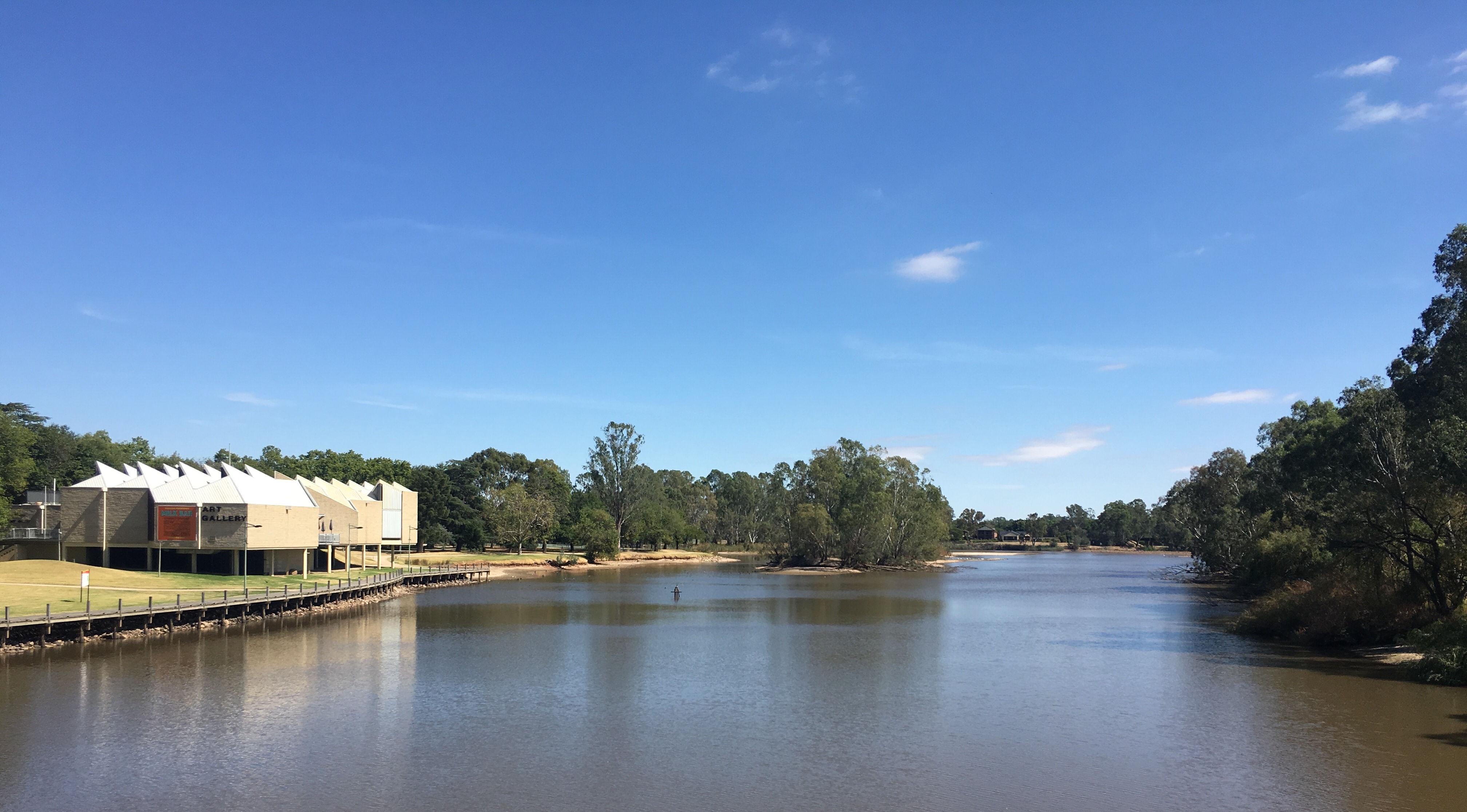 Outside of Benalla is a slip of a siding town called Goorambat where there a silo has been painted and in a wee Uniting church Matt Adnate has created the portrait Sophia’ which has become a local attraction. 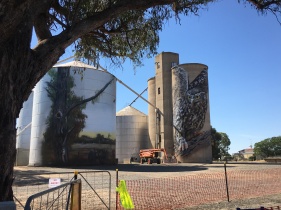 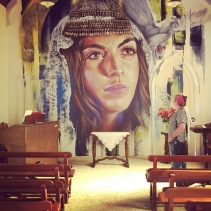 I would encourage anyone to take the time out to get outta your city and explore our wonderful country towns as they are leading the way to colour in the bland residue of the dusty past. The towns are coming back to life and with the extraordinary support of the locals and visitors, they are more than an Aussie country town – they are performing on the world stage where art trails and maps are exposing the talent of the new breed of artists painting the town red! 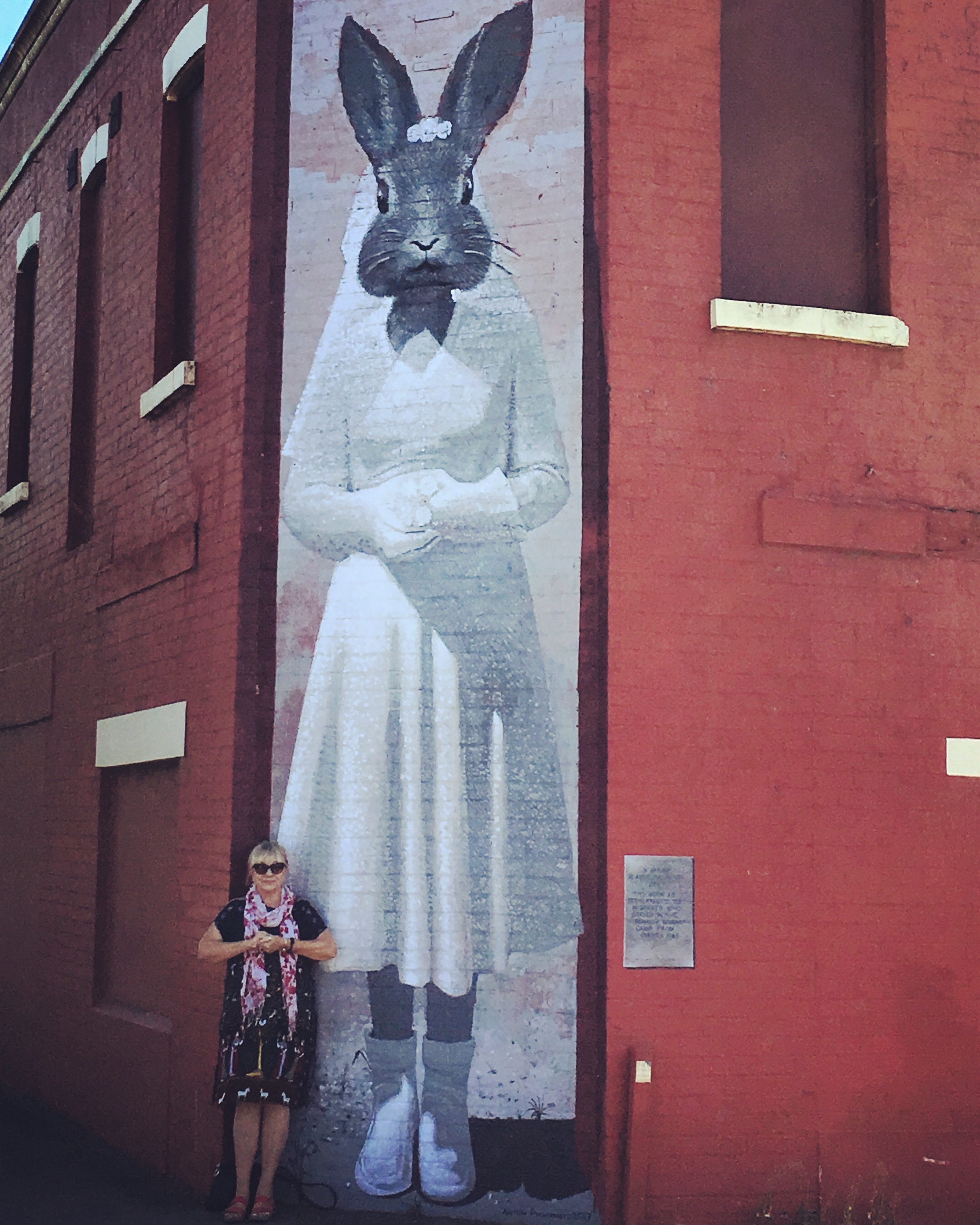 Writer Bev Malzard nearly expired in the heat of the Benalla Wall to Wall weekend and hopes it might be a little later than March next year. BUT find out for yourself and keep in touch with what’s going on throughout the year in the town of the great vanilla slice – and yes, of course she ate one.

3 responses to “Where the art is – try a country town”